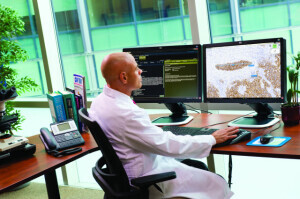 Pathologist at digital workstation
courtesy: Omnyx
Researchers in the UK have determined that whole slide imaging is just as effective for making a primary cancer diagnosis as examining glass slides under a microscope, with the future potential for digital systems to use algorithms to help separate normal from abnormal samples and grade cancers.

The study, one of the largest and most comprehensive validation studies of whole slide imaging for clinical use, was published earlier this month in the journal Histopathology.

The 17 pathologists at University Hospital Coventry used a computer system called The Omnyx Precision Solution, which digitizes slides that are traditionally placed under a microscope and allows pathologists to look at them on a computer. They evaluated biopsies and resections from more than 3,000 patients using both microscopes and the digital pathology system, determining if there were any statistical differences in the accuracy of the diagnoses.

Out of 3,017 cases, there were 72, or only 2 percent, where the glass slide and digital case diagnosis did not agree with each other. In just three cases, the digital platform was determined to be responsible for the variance, including a bronchial biopsy and penile biopsy, where dysplasia was reported on digital pathology but was not present on glass slide microscopy.

The results are within the 95 percent confidence interval for existing variability, proving that digital pathology is non-inferior to glass slide microscopy, the researchers concluded.

David Snead, a pathology consultant at University Hospital Coventry and an author of the study, explained that while the Omnyx system is not approved for primary diagnosis by the U.S. Food and Drug Administration, and can only be used for secondary diagnosis in the U.S., it’s up to individual institutions in the UK to determine whether the technology satisfies the requirements for putting it into practice.

“We’re confident that it works pretty well,” Snead told HCB News. “This study showed that you can use this technology for primary diagnosis.”

Snead said the FDA will likely look at his group's study when making a decision about approving digital pathology for primary diagnosis in the U.S.

Snead said there are some drawbacks to the digital system, and that in a small number of cases they tended to call something dysplastic when it wasn’t, or give an abnormality a higher grade the on the digital system.

“There is a potential to overcall something as a false positive,” Snead said. “It’s unlikely, but something people need to know about when they’re using the system.”
1(current)
2