How to make renting a crane an uplifting experience 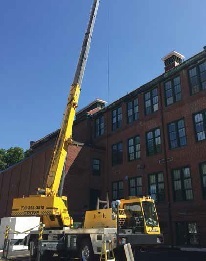 From the December 2015 issue of HealthCare Business News magazine

When your facility is planning to install a piece of equipment (such as a large air conditioning unit) that requires a mobile hydraulic crane, keep in mind that renting a crane is only part of the job. You also need a rigger. The rigger is the person (or people) who will put the straps, chains and cables in place that make the “lift” or “pick,” as it is called in the trade, possible. Riggers can also do the many other tasks needed to be accomplished, based on complexity and nature of the job. Depending on your region of the country, some crane rental companies will also provide the rigging crew, but that’s usually not the case in most big cities.

“When you need a crane, you really need a rigger and a crane, and I’d look for a rigger first,” says Michael Ahng of LaGrange Crane Service. “They can take a lot off your plate. They get involved in all aspects of a job, not just the lift. “If windows have to come out or doors removed to provide access for the installation, however, that’s not the rigger’s job. The facilities management department at the hospital is responsible for things like that.” That’s just one example where you need to plan ahead and determine who should do what. Don’t assume you know what the crane operator’s and the rigger’s responsibilities are. Ask direct questions, and if necessary, get the answers in writing. Also, be aware of local union regulations and jurisdictions. Sometimes simply turning on an electrical switch, if not done by a union member, can have them shut your job down.

According to Ahng, the biggest problem when renting a crane is that “the hospital doesn’t plan far enough ahead when it comes to renting the crane. They get everything else in place and then call the crane company and riggers last. You don’t want your crane rental to be a last-minute decision.” Communication is the key. If you’re installing an A/C unit, you need to let the HVAC company that’s going to hook up the system to your facility’s plumbing know when the “pick” is scheduled, and if that date changes, let them know. Let the crane company and rigger know, too. We can’t say it enough: communication is the key.

“When you’re renting a crane,” John Cereghino of JC Duggan says, “that’s a high-risk operation, so get your insurance broker involved at an early stage. Make sure they require both the crane company and the rigger to have the correct property and casualty limits for the risks the job entails. This is critical. And that ballpark would be limits from $2 million to $10 million. “You also want a clear line of responsibility. Suppose you want to save money by renting the crane yourself, instead of having the rigger do it, which means he’ll mark it up. Then suppose there’s an accident and something is damaged or broken. Whose responsibility is it? The crane company? The rigger? It’s not always clear. In fact, it’s almost never clear in those situations, and you don’t want to face that dilemma.”

You want a qualified rigger handling your equipment, and a qualified rigger possesses a certificate that attests to that. Ask to see it. The same goes for the crane operator. All legitimate crane operators are licensed, so make them prove it. You also want to get multiple bids on your job. “But as we all know,” Ahng notes, “shopping just on the basis of price alone is never a good idea. A low bid may mean the company might try cutting corners and that could result in major problems.”
1(current)
2
3