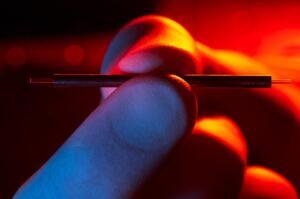 Terahertz accelerator modules
easily fit into two fingers.
Credit: DESY/Heiner Mueller-Elsner
A team of scientists has built a prototype for a miniature particle accelerator with a single module that is 1.5 centimeters long and 1 millimeter thick, which could enable new diagnostic imaging and radiation therapy techniques.

The researchers, part of the Hamburg-based Center for Free-Electron Laser Science — a joint enterprise of DESY, the Max Planck Society and the University of Hamburg — presented the prototype in the journal Nature Communications.

The prototype, which was set up in DESY scientist Franz Kärtner's lab at the Massachusetts Institute of Technology (MIT), uses terahertz radiation instead of radio frequency structures, which the scientists say has the potential to miniaturize the entire accelerator by at least a factor of 100.

“The compact accelerator we are building enables the construction of very bright and potentially fully coherent X-ray sources, which also enable new medical diagnostic imaging techniques, like phase contrast imaging; and also, potentially, new radiation therapy techniques like image-guided small tumor radiation therapy and micro-beam radiation therapy for brain tumors,” Kärtner, a professor at the University of Hamburg and at MIT, as well a member of the Hamburg Centre for Ultrafast Imaging, told HCB News.

“Currently, high-brightness X-ray beams are only available from large synchrotron or free-electron laser facilities, which is not practical for health care. A compact highly coherent X-ray source would address this shortcoming," said Kärtner.

For the prototype, the physicists used a type of electron gun to fire fast electrons into an accelerator module that was tailored to be used with terahertz radiation, which was fed into the module, further accelerating the electrons. The prototype was able to increase the energy of the particles by 7 kiloelectronvolts, according to the scientists. While not a particularly large acceleration, the experiment demonstrated that the principle works in practice, said co-author Arya Fallahi of CFEL, in a statement.

"The theory indicates that we should be able to achieve an accelerating gradient of up to one gigavolt per meter,” Fallahi said in the release. This is more than 10 times what can be achieved with the top conventional accelerator modules currently available, the scientists said. Plasma accelerators could product higher accelerations, but the scientists said this experimental technology requires much more powerful lasers than the ones needed for terahertz accelerators.

Recently, scientists from the European Organization for Nuclear Research (CERN) built a miniature linear accelerator made up of four modules that are each roughly 20 inches long, for a total size of a little more than 6.5 feet. They doubled the operating frequency used for the radiofrequency quadrupole (RFQ), a linear accelerator component used in the acceleration of low-velocity ion beams.

Kärtner said his group’s prototype works at an even higher frequency, roughly 100 times the usual frequency of 1.3 gigahertz, and generates electrons, which Kärtner said is good for making accelerator-driven X-ray sources.

The scientists are looking to make a 20 mega-electronvolt accelerator within the next three to four years, Kärtner said.