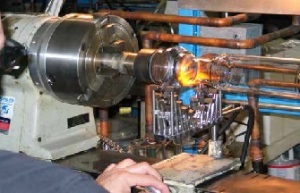 Ever since Wilhelm Röntgen first photographed the bones in his wife’s hand, the X-ray tube (then a Crookes tube) has been a critical and fundamental component of medical imaging. We depend on radiation for a range of vital imaging exams including CT, radiography, fluoroscopy and mammography — and to generate that radiation, we depend on X-ray tubes.

Varian Medical Systems is one of the biggest manufacturers of X-ray tubes, producing between 22,000 and 25,000 of them every year. Mark Jonaitis, general manager and vice president of its X-ray tubes business, says there is a global X-ray tube market, but the demands are very different from one region to the next.

In some regions, breast cancer screening is just now becoming available, he says. In others, mobile C-arms are developing capabilities that may displace high-end cardiac and surgical suites. All of these changes are coinciding with a trend toward digital imaging and easier image acquisition and storage. Heather Funk, senior manager of marketing and business development at Dunlee, expects X-ray tubes to experience modest growth under the current economic circumstances.

Her company, a division of Philips Healthcare, has a rich history in tube design, research and manufacturing. That growth seems to be something independent of imaging modalities that have emerged over the last 50 years or so, like MR and ultrasound. Tom Spees, vice president of sales at Richardson Electronics Healthcare Division, calls these “supplemental support technologies.” His company is an industry leader in replacement tubes, a market that is expected to grow as radiography and CT extend their reach into new frontiers.

Developed markets reduce dose, increase sales
In established markets like North America and western Europe, it’s less about having access to X-ray systems than it is about having access to high-value systems with better functionality and lower dose to the patient. “For CT, it means that the majority will be 16-slice systems where detector size is a major cost driver,” says Jonaitis.

Finding ways to lower the dose not only benefits the patients and technologists — but the glassware itself. “Using dose reduction software enables the X-ray tube to be used in a less harsh way, with the same image quality results,” says Funk. That means longer tube life while decreasing the downtime of the scanner due to tube failures. New hardware and software are becoming available that drive dose levels lower than were once thought possible, says Jonaitis.
1(current)
2
3