The unfortunate pioneer of antiseptic procedures 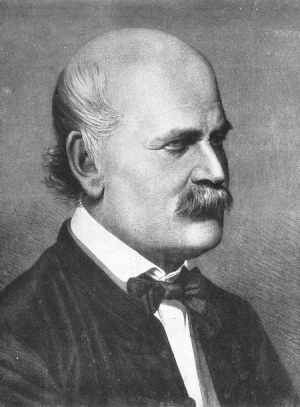 Today, hand hygiene is a given in any clinical environment, but it was once common for doctors to go directly from dissecting a body to delivering a baby without stopping at the sink.

In 1847, a Hungarian physician named Ignaz Phillip Semmelweis correctly hypothesized that many women were dying of puerperal or “childbed” fever after childbirth due to the bacteria on doctors’ unwashed hands. But reducing the mortality rate and providing statistical evidence to support his claim were not enough — most medical professionals of the time dismissed him.
Semmelweis was born on July 1, 1818 near Budapest. He began studying law but then switched to medicine at the University of Vienna. After graduation, Dr. Semmelweis got a job as an assistant to a professor in a maternity ward at Vienna General Hospital.

In the first month of his employment, 36 out of 208 women lost their lives after delivery, a number that stunned Dr. Semmelweis. He soon discovered that the maternity ward where he worked had a notorious reputation and much worse outcomes than the other one in the hospital. It was considered so dangerous that many women said they would prefer to give birth on the street near the hospital rather than to be admitted there.

Dr. Semmelweis was interested in identifying the differences between the two wards. He observed that the incidence of childbed fever was nearly seven times higher in the ward where physicians, not midwives, cared for the women. He then realized that doctors were the only caregivers who performed autopsies, often right before assisting women in delivery. This led him to believe that the “cadaverous particles” transmitted by the physicians’ hands unto the women were to blame for the high mortality rate.

In 1847, Dr. Semmelweis ordered all of the clinicians who performed autopsies to wash their hands with an antiseptic solution before attending to women. This intervention reduced the incidence of childbed fever from about 30 percent to 1 to 2 percent. But the idea that the cause of the high mortality rate was attributable primarily to one reason — hand hygiene — was not accepted as a possibility at the time. Although Dr. Semmelweis tried to share his findings in order to prevent more deaths, he was ignored and largely ridiculed by the medical community.

Eventually, the outspoken physician was dismissed from his post at the hospital. Outraged by the indifference of his colleagues, Dr. Semmelweis began to write letters to prominent obstetricians, often referring to them as “ignorant murderers.” In 1861, he also published his findings in a book entitled “Etiology, Concept and Prophylaxis of Childbed Fever.” But because it was filled with statistical analysis and difficult to read, it was mostly ignored and mocked by other clinicians.

The hostility toward Dr. Semmelweis by his peers took a serious toll on his health. He became severely depressed and may have suffered from premature dementia. Even his wife thought that he was losing his mind. In 1865, he was tricked into visiting a mental asylum, where he was forcibly restrained and institutionalized. Dr. Semmelweis died there two weeks later, presumably of severe injuries sustained from a beating by asylum staff.

Dr. Semmelweis only gained legitimacy in the medical community years after his death, when Louis Pasteur’s germ theory provided support for his findings.
The doctor’s tragic tale even coined a phrase — the Semmelweis effect; this term is used to describe an immediate tendency to reject new evidence because it goes against the established norms.

A statue to honor Dr. Semmelweis, who later became known as the “savior of mothers,” was erected in Budapest nearly 30 years after his death.