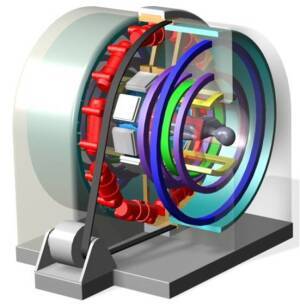 Graphic of the CT/MRI system
(Courtesy Rensselaer Polytechnic Institute)
If radiologists were asked to build their dream modality, it might look something like a new proposed plan for a combined CT/MRI scanner. The system would take the high scanning speed of CT and marry it to the superior soft-tissue contrast that characterizes MRI. But will someone be able to fund this hybrid creation?

After working on the design since 2010, engineers at Rensselaer Polytechnic Institute in Troy, New York feel confident that the device's clinical benefits will drive its complicated production.

"We have established the theoretical foundation, engineering feasibility, top-level design, and clinical benefits. But putting CT and MRI together is a really big step forward, and it's not going to be cheap," lead designer and director of Rensselaer's Biomedical Imaging Cluster, Ge Wang, told DOTmed News.

The new scanner will function differently from other hybrid modalities in that CT and MRI will work simultaneously rather than in sequence, as PET and CT do in a combined scanner.

Its creators hope that the unified scanner can be used to help guide radiation therapy.

"Most prized would be a new modality that not only offers diagnosis, but also changes outcome," Michael Vannier, a radiologist at the University of Chicago, said in an email. "This is typically done by using the system to guide an intervention."

The proposed design consists of a double donut-shaped pair of superconducting electromagnets that form a 1.5T magnetic field in a heart-sized space and leaves room for a CT setup.

The designers also say CT/MRI will be useful for scanning stroke victims.

"There is a common belief among clinicians that in acute stroke 'time is brain'. Therefore, sequential, rather than simultaneous, imaging is done with the sacrifice of brain tissue," said Vannier. "The CT/MRI has greatest promise to combine CT angiography with MRI perfusion, for example."

Wang said he's currently interacting with manufacturers and hopes to be able to make the CT/MRI scanner a reality in three to five years.