In a race against time, mobile MRI arrives at NYU 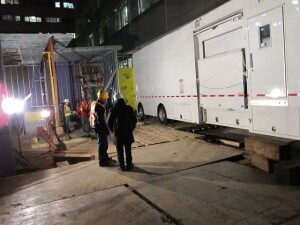 Staff work till the
early morning hours setting
up a new mobile
MRI trailer in
NYU hospital's courtyard.
On a cold December night, more than a dozen people mill around the entrance of New York University Langone Medical Center in Midtown Manhattan. The hospital has been closed for over a month, but the crowd isn't waiting for a patient -- they're awaiting a mobile MRI making an all-day, 630-mile trip from Michigan.

Before midnight, the trailer, which has been driving straight since 10:30 a.m., pulls up. Immediately men with bright vests pour out onto First Avenue to stop the busy late-night traffic. The 50-foot trailer is then guided through two huge double glass doors. This is a slow, tense process, as the trailer is eight and a half feet wide, but the doors only leave a 9-foot opening. But the unit squeezes through, drives over the entrance foyer where patients and staff used to walk, and then goes out into the hospital's muddy back courtyard -- its temporary new home.

The crew then spend the rest of Thursday night, until four in the morning, painstakingly shifting blocks of wood required to support the weight of the mammoth trailer as it inches forward to its final location.

Everyone's impatient, because they're in a race against time. The machine has to be installed and ready for inspectors from the state health department by Dec. 20 -- the second-to-last business day before the holidays. If the deadline isn't met, the hospital will have to wait until later in January and won't be able to provide imaging services during the Christmas season.

"This is a big deal," says John Vartanian, owner of Medical Imaging Resources, a mobile medical company with a fleet of 40 trailers that's providing the MRI.

NYU was one of several New York City hospitals to be shuttered after losing power and getting flooded when Hurricane Sandy made landfall on the East Coast in late October. Floodwaters from the storm reached the hospital's basement where its three MRI scanners were kept. All were destroyed.

The hospital is now re-opening in stages, with its main campus expected to be fully operational at the end of next month. In addition to the mobile MRI at its main campus, the hospital has acquired three other scanners, two now parked several blocks north of the hospital, and another kept downtown for women's imaging, Vartanian says.

"Knock on wood, they're going to get their certification and then the people in the area will have MRI to come to in the holiday season, which is a tough season. People get sick quite a bit then, and staff is low, so they need that service," he says.

The trailer drives through
the hospital's foyer.