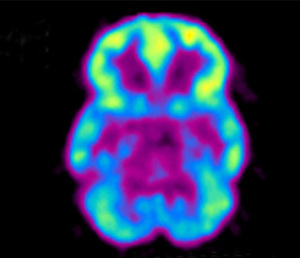 An 18-FDG brain scan
(Credit: Brookhaven)
The government lab that first synthesized one of the world's most ubiquitous PET imaging agents was named a historic landmark last week.

The American Chemical Society's New York chapter bestowed the honor on Brookhaven National Laboratory, where scientists in 1976 cooked up the first batch of 2-deoxy-2-[18-F]fluoro-D-glucose, commonly referred to as 18-FDG.

After being developed at Brookhaven in Upton, N.Y., the radiotracer was sent to the University of Pennsylvania for human brain imaging on a Mark IV scanner, the institute said in a press release.

"18-FDG is now the standard radiotracer used for positron emission tomography neuroimaging and cancer diagnosis, with more than 1.5 million 18-FDG PET scans performed annually," the chemists society said in its citation, according to Brookhaven.

18-FDG is a radioactively tagged molecule that acts like glucose, and travels to tissues in the body that need energy. Although originally developed to study brain function, it has become an important tool in cancer diagnosis as energy-hungry tumors are major consumers of glucose.

The recognition of Brookhaven, which is run by the Department of Energy, also honors the chemists who helped synthesize 18-FDG, such as Joanna Fowler, who still works at Brookhaven and in a statement credited her colleagues Al Wolf, Tatsuo Ido, Vito Casella and Chung Nan Wan with helping to develop the imaging agent.

18-FDG was made by substituting a hydrogen atom in 2-deoxyglucose with a radioactive form of fluorine, 18-F, Brookhaven said. When injected in the body, the radiotracer emits gamma rays that are picked up by the PET scanner and used to generate images of metabolic activity, the lab said.

The idea to radioactively label 2-deoxyglucose and use it for brain imaging came from Louis Sokoloff at the National Institutes of Health and Martin Reivich at the University of Pennsylvania, the lab said.