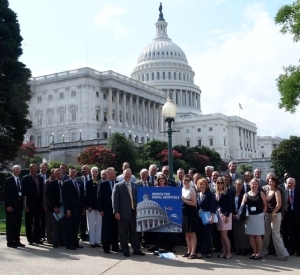 A few years ago, Carilion Giles Community Hospital in Pearisburg, Va. was faced with a decision: undergo a dramatic transformation or continue with business as usual. The choice was obvious.

“So many aspects of the old hospital were making it almost impossible to pass Joint Commission accreditation and those types of things. It was becoming more problematic all the way,” says James Tyler, the hospital’s vice president.

The critical access hospital was one of the first in the country to receive funds from the Hill-Burton Act in 1946. The law had been passed by Congress to increase the nation’s ability to provide health care, with the intention to provide at least 4.5 hospital beds per thousand citizens. But in the 60 years following, funding cuts increased and requirements to obtain additional funding became more difficult to meet.

Through corporate bonds that were acquired before the market crashed, and more importantly, because the Critical Access Hospital is part of the Carilion Clinic Health System, a bigger, newer hospital was built in 2010.

But most rural hospitals across the U.S. are not as fortunate to have the financial capital that often comes from being associated with a large health system.

Rural hospitals are up against a confluence of challenges that impact their bottom lines. A disproportionate number of Medicare beneficiaries and low patient volume are two of the overarching contributors to the financial woes.

A critical time in Congress
A high portion of Medicare patients make providers at rural facilities more vulnerable to changes in reimbursements and eligibility— something inextricably linked to the financial health of the hospital.

Recognizing the unique financial challenges that rural hospitals face, Congress has enacted a number of programs to aid providers. Medicare extenders, as they are called, normally appear as payment adjustments and have to be renewed on a yearly basis. Currently, many are under fire as Congress figures out ways to decrease the budget deficit.

“For the most part, people think rural hospitals are not in danger because there are smaller amounts of money associated with rural programs,” says Lisa Kidder, vice president of legislative affairs at the American Hospital Association.

But it may be that kind of thinking that’s lining up rural facilities for the chopping block. Multiple proposals are currently on the table with a focus on ways to cut health care programs rural hospitals depend on.
1(current)
2
3
4