Where the Olympics' 2 MRIs and 1 CT scanner come from 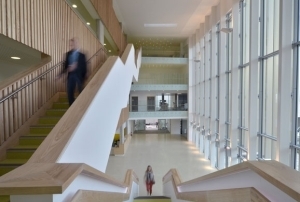 The 2012 Olympic Polyclinic (Credit: GE)
Every day at a four-story, 54,000-square foot building recently constructed in east London, athletes are receiving a variety of imaging scans to diagnose the strains, pulled tendons and other minor maladies likely to befall sprinters, swimmers, archers and judo experts as they compete for the gold in the 2012 London Olympic Games.

Reuters reported yesterday that GE, a top Olympics sponsor since 2005, sold $100 million worth of lighting, power and medical equipment to the Games organizing committee. All told, the conglomerate has made $1 billion in revenue from its recent Olympics deals, according to reports.

When asked about the breakdown of medical products from that figure, GE told DOTmed News it would not disclose specific numbers. But the company did provide a list of equipment that it sold to the London Organizing Committee of the Olympic and Paralympic Games, or Locog, which runs the 2012 Games, including two MRIs, one CT scanner and several X-ray and ultrasound devices. (A 2009 press release from GE describing its contributions to the Games valued the equipment at more than $7.3 million.)

The health facility that got most of the equipment, called the Olympic Village Polyclinic, is located in the athlete housing area. Open around the clock, the clinic is expected to treat 200 athletes a day, GE said. In the 2008 Games held in Beijing, where the equipment was also supplied by GE, there were 450 X-rays, 440 MRI and 320 ultrasound scans performed over the course of the event, the company said in a June press release.

After the Games, the Olympic health center will be handed over to Britain's National Health Service to act as a community clinic for nearby residents. However, Locog would likely sell the MRIs and CT scanner on the open market, a GE spokesperson told DOTmed News by e-mail.

The equipment now at the clinic includes a Discovery MR750w wide bore 3T, the Optima MR450w wide bore 1.5T, the Discovery 750H CT scanner, the Discovery XR656 wireless digital X-ray, and the Venue 40 and Logiq E9 ultrasounds. Patient records are stored on a Centricity RIS/PACS system, and there are also some Mac ECG units around.