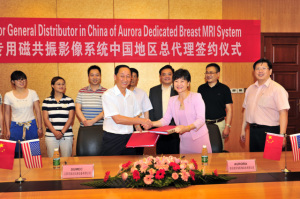 Aurora and Sumec reps signing the deal. (Credit: Sumec)
Aurora Imaging Technology Inc. said Monday it inked an exclusive deal with Sumec Group Corp. to distribute its breast MRI machines in China. Terms of the deal were not disclosed.

Sumec, a shipbuilding and engineering company, is a member of the state-owned China National Machinery Industry Corp., or Sinomach, conglomerate.

The American Cancer Society recommends women at high risk for breast cancer, such as those with the BRCA1 and BRCA2 mutations, receive a breast MRI scan every year, in addition to screening mammography.

Breast MRIs are more sensitive than X-rays at detecting cancers, especially for women with mammographically dense breasts. In fact, the two companies said the technology could be especially useful in China as breast density is greater, on average, in Asian women. A 2007 American Journal of Roentgenology study, for instance, found Asian women had denser breasts even after controlling for age and body-mass index.

The first iteration of Aurora's (now) 1.5-Tesla Dedicated Breast MRI System was cleared by the Food and Drug Administration in 1996. Privately held Aurora is based in North Andover, Mass.