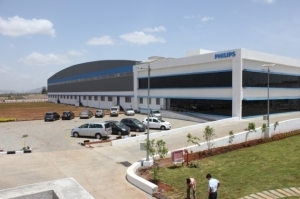 Located 92 miles east of Mumbai in the city of Chakan, the Philips Development and Manufacturing Center will make X-ray systems and Allura FC, the company's first India-made cath lab. The factory opened its doors Thursday.

Philips said the equipment manufactured at the facility, such as the Allura, which has been out since 2010, will not just be marketed to Indian health care providers, but potentially also to the "value segment" in other countries looking for entry-level products, such as in Eastern Europe, Russia, Latin America and other parts of Asia.

The move is part of Philips' broader goal of beefing up its presence in what the company calls "growth geographies," but specifically India, China and Brazil.

"Philips has always been a leading player in the premium, high-end segment," Steve Klink, a company spokesman, told DOTmed News. "But three or four years ago, we decided also to enter a middle-end, or value segment, and for that we realized we needed to have a local footprint."

And since 2009, the company has more than doubled its low-cost manufacturing capacity worldwide, adding nearly 1,000 employees to its developing world R&D staff, according to a recent presentation by Philips' imaging systems sector boss Gene Saragnese, which the company shared with DOTmed News.

In the presentation, Saragense said growth geography's equipment market (for imaging and patient monitors) was growing at twice the rate of the global average. And while the value segment of the international X-ray market might be small now, for instance, it's growing at a brisk 15 percent every year, Klink said.

Despite the rapid growth, Philips said it has had to do more than just open a factory. The company has also been running training programs, helping radiologists and other health care providers improve their skills at India's top-tier hospitals.

"A limiting factor in the growth is [the lack of] trained personnel," he said.

But as Philips helps train doctors, it's also working on new equipment releases. The company said it has six new "value offerings" coming this year, including CT and DR systems in China, a DR system in Brazil and a surgery system in India.