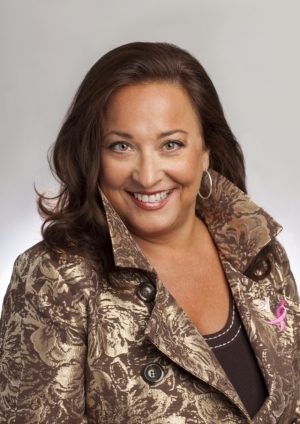 Liz Thompson, president of
Susan B. Komen for the Cure
From the May 2012 issue of HealthCare Business News magazine

While the pink ribbon used to promote breast cancer awareness was first on the scene in 1991, the organization behind it has a history that goes back another decade.

Susan G. Komen for the Cure is the largest organization of its kind focused on eradicating breast cancer. Founded by Nancy Brinker as a way of fulfilling a promise to her sister Susan, who died of breast cancer in 1980 at the age of 36, it has outgrown its modest start (just $200 seed money and a list of friends to call upon) and now boasts chapters across the country and events that raise millions.

In September, shortly after her one-year anniversary with the organization and months before the recent flap with Planned Parenthood [see story on page 38], DOTmed News spoke with president Liz Thompson to get a better idea of Komen for the Cure’s mission and methods. Prior to her time with Komen for the Cure, Thompson spent 17 years in medical publishing. It was in publishing that Thompson met a person that would shape her future.

“My very first job was with Appleton and Lang, owned by Simon and Schuster at that time,” she recalled. “The publisher, Lynn Rector Patterson, was the very first woman to hold that position and I, like many others, had a great deal of respect for her,” she said.

As the first woman to hold that position, Patterson faced significant pressure to prove herself to some with old-fashioned notions of the workplace. Unfortunately, Patterson wasn’t just battling to break through the glass ceiling — she was also battling a disease, which would ultimately take her life. “I was working late one night and Lynn, who always was there late, asked me to answer the door when the bell rang. Two guys arrived with a sofa and I showed them down the hall to her office,” she said. Patterson asked her in and invited her to sit down for a glass of wine. During the conversation, Thompson quipped that at some point, she too, would have a sofa in her office. Patterson laughed and wished her every success.

A friendship developed between the two, but after a few months, Thompson
observed something very unusual. “I noticed the door was always closed to her office. But I didn’t have a hint as to what the problem was until another late work night when she called me into her office to talk about something,” she said. “During the meeting, she told me she had metastatic breast cancer and didn’t anticipate she’d be alive for the conclusion of a project we were working on.”

Patterson hadn’t disclosed to anyone else in the office that she had cancer — she felt it would be seen as a weakness, so she was incredibly lonely. “Toward the end of the conversation, she said, ‘I really hope you’ll make a difference in the fight against breast cancer.’”
1(current)
2

Read more stories from the May 2012 issue