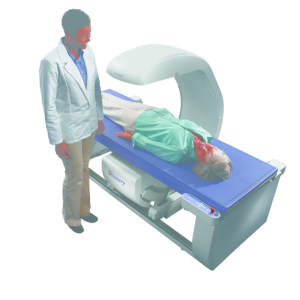 With reimbursement cuts back, the sector is reaching a breaking point.

In February, Congress failed to include an extension of the current reimbursement rates for Medicare doctors performing dual-energy X-ray absorptiometry, or DXA, the standard test for bone mineral density, and the most accurate way to detect osteoporosis, a disease that affects an estimated 80 million women, according to the National Osteoporosis Foundation. Effective March 1, Medicare payments for DXA were reduced by almost 50 percent, down from $98 to $56.

“56 is just a silly number, it’s not even in the ballpark for people buying new machines,” says Donna Fiorentino, legislative counsel for the International Society for Clinical Densitometry.

Supporters of DXA, like Fiorentino, have been frustrated for some time as they witnessed a constant back and forth from Congress over Medicare reimbursement for DXA.

When the Bone Mass Measurement Act passed in 1997, it introduced uniform coverage under Medicare Part B for DXA screening. But in 2007, reimbursements in the office setting—where about two-thirds of DXA scans are performed—dropped. According to a recent study co-authored by Fiorentino in the journal Health Affairs, rates plummeted from $140 in 2006 to $62 in 2010. Consequently, office-based DXA scans dropped by 70 percent. In 2010, scans reached the lowest point in the study period. Congress intervened and included a provision in President Obama’s Patient Protection and Affordable Care Act of 2010 to encourage DXA testing, and reimbursement rates were increased to $98 from 2010 through 2011.

But according to industry consensus, cuts introduced in March will have a significant impact on the bone densitometer market going forward.

The end of an era
Even before the latest round of cuts, private practices offering bone density testing never made much money from DXA scans to begin with.

Laura Gustavson, skeletal health business leader for GE Lunar, says most private physicians lease their machines for roughly $650 to $850 a month, depending on product and software configuration.

Hologic, Inc. offers options to practices where they can expect to break even at about one patient per day.

But questions still remain about what doctors will do about DXA given the latest news from Washington.

Read more stories from the May 2012 issue