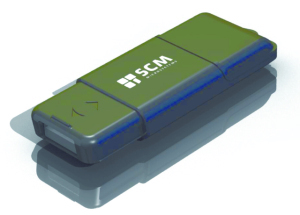 Identive's SCL3711reader (Credit: Identive)
A popular video making the rounds on the Web for an Xperia smartphone accessory shows a somewhat hipsterish young man going through his day while merrily rubbing his phone against a bunch of tags. When he enters his car for a drive, he taps the tag draped over the rearview mirror in his car, and it "sets" his phone to go into GPS-and-driving mode. When he gets home for the evening, he taps a tag on his nightstand, and his phone then goes into sleepy time mode, with the ringer off and the alarm automatically set for the next day.

Soon, thanks to the work of two companies, something similar could be coming to a radiology department near you.

The technology behind the tapping is called near field communications, or NFC. It's a standard that was finalized in 2004 by Nokia, Philips and Sony (which makes Xperia), when they founded the NFC Forum.

The tech is similar to that used by so-called proximity RFID tags, and uses radio waves to get two electronics devices communicating. In general, it involves a "passive" NFC chip, or tag, and a reader. NFC is only effective over a few centimeters at most -- a selling point, according to its backers, who claim this makes it more secure. But it also means that to get the devices talking, you have to tap them together.

The NFC Forum which, with fellow-minded vendors in the Smartcard Alliance, is hosting a gathering about the technology in May in San Francisco, thinks 2012 is going to be a big year for NFC. Much of the excitement about NFC centers on electronic payments, where companies turn smartphones into electronic wallets. This is already happening. Just a short while ago, Google launched such an app, Google Wallet, that works with its Nexus S 4G phone, and lets people buy stuff by tapping their phone at compatible cash registers. In fact, the NFC Forum estimates nearly 150,000 vendors have NFC-friendly point-of-sale terminals. And this year the market for NFC mobile payments is expected to exceed $30 billion, according to Jupiter Research information cited by the group.

But tapping your phone to buy a tube of toothpaste at Duane Reade instead of pulling out your billfold is not the only application of the technology. Some companies are looking at uses in health care. And two businesses, Identive Group Inc., and WPG Americas Inc, are working on a pilot project in radiology departments across the country.
1(current)
2
3