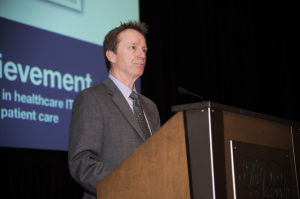 ICD-10, meaningful use and baby barcodes

One year has passed since DOTmed Business News’ interview with HIMSS President and CEO H. Stephen Lieber. At the time, Lieber was gearing up to celebrate the society’s 50th anniversary. Today, the party plans are old news and intense efforts are underway to keep health informatics advancing at a steady clip. Lieber took time to provide an update on some initiatives he talked about last year and revealed some new plans for HIMSS.

DMBN: So a lot has happened since last year, what are the updates? What are the current challenges in the IT sector?

Lieber: The move from ICD-9 to ICD-10 which, needs to happen by Oct. 1 2013, is one of the key challenges. The United States is the last among industrialized nations to make the move to ICD-10 and in fact, Europe and other parts of the world are already starting to adopt ICD-11. The change will mean the granularity of describing the interrelation between patient and physician will increase by about a factor of 10.

DMBN: Will this be a major challenge again when or if we move to ICD-11?

Lieber: The big change is from nine to 10. That’s because every health care encounter currently captured is described in say, 40,000 codes. With the move up, it’s exploded to maybe 300,000. It’s a complete change to the coding structure of health care treatment services, so that means virtually every system that touches a patient has to be modified. From a practitioner side, they have to learn a new set of codes. So it’s also a workflow change and technology programming change.

DMBN: Is the move a benefit or a burden?

Lieber: The fair answer is it’s a mix – the reality is there’s so much going on right now, it’s viewed as a burden. We’re going through the work necessary to meet meaningful use process. It’s unfair to say it’s a paperwork exercise, because there’s so much on people’s plates over the next few months.
I’m hearing the challenge within the IT departments of care delivery organizations being able to tackle this along with other IT projects.

DMBN: Speaking of other IT projects, how are we faring with meeting meaningful use? Has there been a substantial improvement with facilities meeting requirements since we spoke last year?

Lieber: Well, it’s up from zero a year ago, so yes, that’s significant. You have roughly 2,700 to 2,800 hospitals who have registered for the Medicare and/or Medicaid EHR incentive programs. You’re over the halfway point in terms of the 5,000 U.S. hospitals that can register. 1,200 to 1,300 already are qualified and receiving payments.
1(current)
2
3