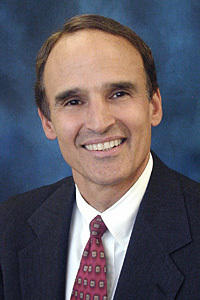 Robert Pearl (Credit: Permanente)
Travelers to South America can access their bank account from any humble ATM in the airport, but patients admitted to the emergency room with chest pain over the weekend often can't get their hands on electrocardiogram readings taken previously at a doctors office until the following Monday, thus raising health care costs.

Dr. Robert Pearl, the outspoken CEO of the Permanente Medical Group, a division of Kaiser Permanente, used this example to show why health care was lagging behind other industries when it comes to using information technology.

"Why do we provide so much less to our patients than banks do?" he asked attendees at the 8th Annual American Health Care Conference in Anaheim, Calif. on Tuesday.

Pearl said implementing the information technology retail and banking sectors take for granted was one of the only hopes to redeem the American medical system before it devolves into a two-tiered system, with one style of health care for the rich and one for everyone else.

"American health care most closely resembles a 19th century cottage industry," he said, adding that it was a fragmented system, mostly paper-based, with little leadership structure.

While the poor today don't have the same level of health care provision in the United States, he thinks it could get much worse. "I'm talking about a system where the middle class gets less and less, higher and higher deductibles, till there's rationing as the solution to the American health care crisis. Once that happens, we'll never go back. Today is the last great hope, I believe, for American medicine," he said.

Pearl thinks better integrating technology and employing preventive services is the best shot at boosting efficiency and reining in costs. He noted that the Kaiser Permanente system, the country's largest non-profit health plan, has been pioneering ways to help doctors share information and keep patients out of the hospital.

For instance, in a claim Pearl has made before, he said if every American received the same level of preventive services that Kaiser provides, there would be 200,000 fewer heart attacks and strokes. It's an extrapolation from a New England Journal of Medicine article from June 2010 that found the number of heart attacks at Kaiser fell about a quarter from 1999 to 2008, a drop credited in part to preventive strategies, such as giving patients beta-blockers or statins, and coordinated by Kaiser's complete electronic medical record system.

The technologies Pearl envisions to help are not even terribly cutting-edge. He sees a lot of mileage out of video and e-mail .

"I think video will be a major part of how health care is delivered in the future, if we're successful," he said.

For instance, he said in his system teenagers receiving Accutane acne treatments have tele-dermatology conferences so doctors can make sure the treatment is working and the patient isn't getting depressed, a known side effect of the drug. The conference only takes a few minutes, and doesn't require scheduling weeks in advance.

E-mail has similar productivity-boosting benefits. Pearl estimates the average Kaiser patient sends 5-6 secure e-mails to the health system a year. He thinks if this became widespread, it could lead to billions of dollars in savings. Of course, the trouble is figuring out a way doctors can get reimbursed for these services.

"But it wont happen, unless we're able to change the structure, change the financing, and put in place leadership structure to make it happen," he said.