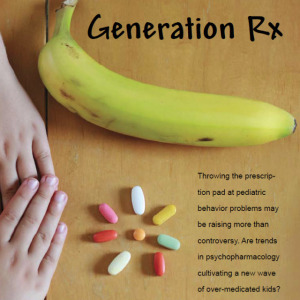 The Medicated Generation? The Centers for Disease Control's National Center for Health Statistics reports that in 2005, 2.9 million children in the U.S. were prescribed medication for "difficulties with [his/her] emotions, concentration, or ability to get along with others." Given those diagnostic criteria, pretty much any parent you stop on the street will tell you that the disorder being medicated is childhood.

What does that number actually mean? Are more cases of mental illness that require medication being identified in kids? Are parents and teachers relying on a convenient alternative to reasoned discipline and behavior management? DOTmed gets up close and personal with the mental health professionals deeply involved in finding the answers to those complex questions.

A is for attention deficit disorder

According to the National Institute on Drug Abuse, Attention-Deficit Hyperactivity Disorder (ADHD) is the most commonly diagnosed behavioral disorder in children and adolescents in the United States. Although stimulants were recognized as a treatment for the symptoms of what is now classified as ADHD as far back as the 1930s, the widespread use of stimulants in the treatment of ADHD in the 1990s sparked a firestorm of controversy.

Prescribing physicians viewed the use of Ritalin (methylphenidate) as a breakthrough that could change the face of pediatric psychopharmacology. Parents, grateful for a remedy that could immediately calm their unruly progeny, readily accepted the break in the battle that the drug promised; in Ritalin, teachers had an antidote for those restless and inattentive charges that disrupted their classes and exhausted their patience.

Critics cited a lack of studies to demonstrate the drug's efficacy, concerns about side-effects as a consequence of long-term use on the developing brain, and viewed Ritalin as a dangerous drug of convenience rather than necessity.

As the debate over Ritalin raged, the class of psychiatric drugs known as Selective Serotonin Reuptake Inhibitors (SSRIs) was gaining popularity in the treatment of depression, anxiety, panic and obsessive-compulsive disorders in adults. (These days, many SSRI compounds have immediate brand recognition, such as fluoxetine (Prozac), paroxetine (Paxil), sertraline hydrochloride (Zoloft), to name a few.)

In 1999, the National Institute of Mental Health sponsored the Multimodal Treatment of ADHD (MTA) study, the first multi-site study of the effect of Ritalin in children with the ADHD. Chief of the National Institute for Mental Health Child and Adolescent Treatment and Intervention Research Branch at the NIMH, Benedetto Vitiello, M.D. co-authored the landmark investigation, which followed 579 children ranging in age from 7-9 for 14 months.
1(current)
2
3
4
5
6
7
8