That’s according to a new study out of university hospital Charité – Universitätsmedizin Berlin in Germany which, for the first time, has been able to link mobile stroke units to improved clinical outcomes.

"Apart from normal ambulance stuff, STEMOs are equipped with a CT scanner and point-of-care laboratory. They are staffed with a neurologist trained in emergency medicine, a radiology technician and a paramedic. This enables the STEMO crew to complete a stroke workup directly after arrival at the scene and start thrombolysis before transport to hospital," professor Dr. Heinrich Audebert, of the Center for Stroke Research Berlin (CSB) and Charité's department of neurology and experimental neurology, told HCB News.

Audebert led the team that introduced the mobile units, known as STEMOs (Stroke-Einsatz-Mobile), to the streets of Berlin, with the first one launched in February 2011 in conjunction with the Berlin Fire Department and MEYTEC GmbH. Years of research showed STEMO-based stroke treatment to be safe and that it reduced time to treatment, which is crucial as every minute counts after a stroke. 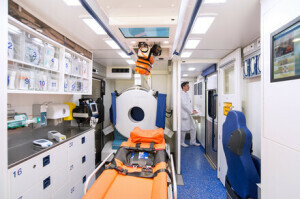 Known as the B_PROUD study, the evaluation looked at stroke emergencies in Berlin from between February 2017 and May 2019. If available within the relevant area, a STEMO was dispatched at the same time as the conventional ambulance to allow the patient to be treated before they arrived at the hospital. If no STEMO was available, only a conventional ambulance was dispatched.

A total of 749 cases out of 1,543 cases were treated in a STEMO (49%), while a conventional ambulance cared for patients in 794 cases (51%). The odds of patients incurring significant disabilities three months after stroke dropped by 29% if treated in a STEMO versus conventional emergency medical service, according to the study. Those in the STEMO group more often received thrombolysis (60% to 48%) and received it on average 20 minutes earlier. Approximately 7% died after three months, compared to 9% of those in the conventional ambulance group. In addition, approximately 51% of STEMO patients had no stroke-related impairments in day-to-day functioning, while only 42% treated in conventional ambulances reported the same. The STEMO group also scored significantly better on quality-of-life measures.

"We love that this will convince many people that we shouldn't wait until patients arrive at hospital," said Audebert. "There may be different ways to shorten delays to treatment, but MSU are obviously very effective. There are still additional data to be analyzed, including a cost-effectiveness analysis. With the strong effects, we are carefully optimistic to see convincing results in this analysis as well."

The Berlin Fire Department operates three STEMO vehicles today. Through a collaboration between between Charité, Vivantes – Netzwerk für Gesundheit GmbH and Unfallkrankenhaus Berlin, these units cover most of the Berlin area.

The study was published in JAMA.