by John R. Fischer, Senior Reporter
MR systems require continuous monitoring to ensure components are operating to spec. Failure to keep tabs on the magnet can lead to financial disasters.

Remote monitoring has become an increasingly popular way for MR providers to make sure their systems are healthy — and they do it without requiring anyone on site; a good bonus during a pandemic. While many of the scanner manufacturers offer their own remote monitoring, there are also many third-party companies that provide the service.

HCB News spoke to several of those companies to learn more about the common conditions and events that affect MR performance, what capabilities to look for in a monitoring system, and to what extent COVID-19 is bringing the benefits of remote monitoring to center stage.

Larry Sodomire, president of Total Data Connect, speaking with HCB News, sums up the value-proposition nicely. “Remote monitoring provides peace of mind while systems are sitting idle or have limited usage,” he said.

When scan volumes drop off dramatically, who could ask for more?

Helium boiloff
Liquid helium is the life blood of every MR scanner. Getting the gas into a liquid state requires bringing the temperature down to cryogenic levels, and it’s from within that profoundly cold liquid (either 10 degrees kelvin, or 4 degrees kelvin, depending on the system) that the MR magnet gets the superconductive ability to produce medical images.

Fifteen years ago, liquid helium could be purchased for less than $5 a liter. Now, rising demand and the scarcity of the gas has sent prices soaring to anywhere from $15 to $30 a liter. As a result, when the gas boils off within the MR, providers can wind up spending thousands of dollars to correct the situation.

“For us, the cost of helium has roughly quadrupled in the last 10 years,” said Ray McClellan, president of MRI Technical Services, who describes it as an important reason for doing system monitoring.

Newer model scanners operate at 4 degrees kelvin and are sometimes called “zero boil-off” systems because they do not lose helium during normal operation. While these scanners are better at conserving helium, a problem with the MR cooling system is even more urgent with these units due to the requirement for extra low temperatures.

A number of issues can lead to helium boiloff. Whether it’s from power outages, halts in chiller water flow, or a breakdown in the system’s cold head, which re-condenses the gas into liquid to prevent it from burning off.

Older MR scanners that operate at 10 degrees kelvin are still able to scan without the cold head for a little while, but replacing it is still crucial to prevent helium boiloff. If left unchecked for a long period of time, the loss of helium can cause the magnet to become quenched, where the helium inside turns to gas and vents loudly from the magnet. If you’re operating an MR suite, an unanticipated quench is right down there among your worst-case scenarios.

“For remote monitoring, signals whose indications relate to the possibility of helium loss are closely monitored,” said Dale McGuire, VP of research/development and training at BC Technical, a subsidiary of Alpha Source Group. “The main purpose is to catch and solve problems before helium loss occurs. The cost to replenish helium is not only high but its loss can cause additional service expenses as well.”

A breakdown of parts
The chiller is one of the most important components of an MR system. It is responsible for cooling and keeping a variety of other components within the scanner at specific temperatures, including shield coolers and shim coils. The breakdown of a chiller, in turn, can cause cold head temperature to rise and helium to boil off.

MR remote monitoring not only alerts users early-on to problems with the chiller, it also enables them to maintain high chiller availability, which translates to low downtime for the MR system.

“What is changing now is that MR providers are starting to see value in remote monitoring of MR chillers,” said Chris Wong, VP of operations at Advanced Cooling Technologies, Inc. “We use remote monitoring of the chiller to alert us to when a problem occurs needing a service call, and to monitor the cooling performance over time. We have the ability to fix issues early, and reduce or eliminate costly downtime events that impact the MR. It provides a better customer experience because of higher chiller availability, and gives us more flexibility to plan service around the customer’s busy schedule.” 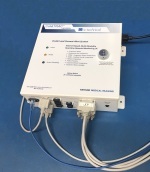 ColdTRAC monitoring system
from BC Technical
Remote monitoring also can keep track of HVACs, power, temperature, pressure and cryo-compressor run conditions. For instance, if a scanner’s AC unit is running weaker than usual on a hot day or in an area with hot climates, that can lead to a breakdown and a rise in the temperature of the MR equipment room.

Other issues remote monitoring can alert users to are changes in room temperatures, humidity and atmospheric pressure, as well as incorrect signal-to-noise ratios for the performance of surface coils.

“This data is measured continuously and uploaded to a website every minute,” said McClellan. “The web page sends out alarms via email, text or both to any number of users anytime a value goes outside of set limits. At this point, someone will log onto the website and check the current data and historical graphs to determine the situation and whether or not it is an immediate problem. We bias the set points conservatively to catch problems as early as possible.”

Monitoring progress
Poor maintenance is one of the top, if not the largest, reason for breakdowns in MR components. Remote monitoring can give providers progress reports to help improve outcomes and cut off issues before they become serious.

“By comparing a week’s or a month’s worth of data you start trending and can easily see something is going to go out of spec — and fix it before it fails entirely,” said Sodomire. “We monitor the doors being open, humidity, g-shock during transport, and basically can convert our system to monitor whatever you desire.”

Programs like this are especially handy in identifying urgent services needs concerning the MR system itself.

“Magnet related, urgent services would include power issues, helium pressure, sensor readings related to internal temperatures, and chiller problems,” said McGuire. “Based on readings we can determine whether a call requires immediate action or can be scheduled. We have two types of remote units: one that monitors magnet related issues and a newer version that monitors the magnet and system issues.”

The best argument for implementing MR remote monitoring is the economic savings it provides.

"MR downtime is expensive and inconvenient. Remote monitoring enables service teams know about problems immediately,” said Wong. “When time is money, getting someone to the site fast to fix the problem quickly is very important."

Despite experiencing little impact as a result of the pandemic, McClellan believes that changes created under these conditions will, in the long run, make remote monitoring and services more attractive to providers.

“I think the new realities of the pandemic only make remote monitoring and service access all the more practical,” he said. “With travel limited (or in some interstate cases subject to quarantine periods) and social distancing in effect, doing as much service as possible from your home or office seems like an obvious solution.”