by Sean Ruck, Contributing Editor
If you happen to work in the X-ray equipment industry then you’re probably familiar with the name Pat Fitzgerald. The recently-appointed president of Chronos Imaging, a new company manufacturing X-ray tubes, has literally been in the business since before he was old enough to have a job.

As a child, Pat’s father ran Continental X-Ray Corporation. “I can remember being around X-ray equipment, dealers, and ISOs since I was a little kid. I used to ride my Big Wheel around the plant on Saturday mornings when I would go into Continental to spend time with my Dad,” he says.

Fitzgerald went to college with the intention of being an engineer, and although he excelled at math and physics, he says his heart wasn’t in it. “About halfway through, I decided I didn’t like it. My dad was the one who suggested I go into marketing and sales.” 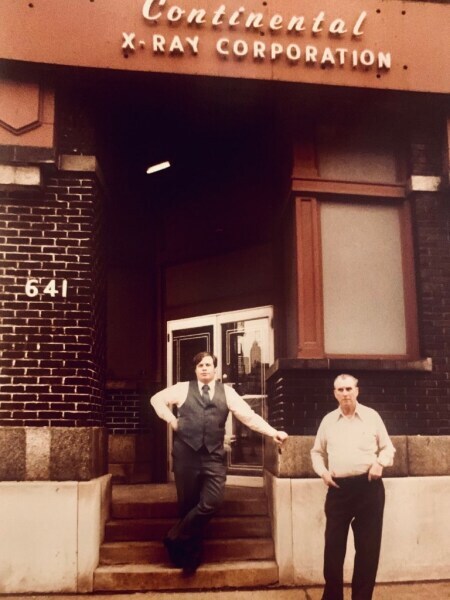 Pat Fitzgerald's father (L) on the steps of the old Continental X-Ray building around 1976 with founder, Loyal Worden.
Fitzgerald cites his father as his key inspiration and mentor. “Growing up, I always dreamed of being the president of Continental X-Ray like my dad. He is a great guy and I always wanted to be like him.”

Rather than join the family business, Fitzgerald decided to join Eureka X-ray Tube Corporation. Tom Spees, an industry icon in his own right, was his first boss out of college. Eventually, Fitzgerald became national sales manager for Eureka.

While Fitzgerald earned his stripes at Eureka, Continental continued to grow. Eventually he came home to the family business and developed a corporate accounts program. “That space was very hot for the type of systems Continental made, and we quickly secured contracts with Amerinet, Premier, Columbia/HCA and others,” Fitzgerald recalls.

Continental’s success ultimately led to an acquisition by Thermo Electron. Under the new umbrella, Fitzgerald stayed on and helped expand the corporate account relationships. After a year, his father decided to retire, and Fitzgerald was named the president of the Continental division. “I was 30 at the time and was very proud to be leading what had been my family business,” he says. Even though he achieved his dream, Pat’s professional story was still in its early stages.

Shortly after leaving Thermo Electron, he received a call from Tim Hansen, who was president of Picker Medical Systems at that time. Hansen’s company had just built a large new factory in Aurora, IL for their X-ray tube subsidiary, Dunlee. On the phone, Fitzgerald admitted that he hadn’t even put together a resume yet. It didn’t matter. Fitzgerald and Hansen scheduled a meeting in Cleveland. “I left Cleveland as the general manager of Dunlee,” Fitzgerald says.

A few years went by and Philips bought Picker and thus Dunlee, but Fitzgerald again stayed on and served as president and general manager for 15 years. During that time, Dunlee helped create the global third-party CT service market with a full portfolio of CT replacement tubes.

In 2014, Fitzgerald joined Richardson Electronics as EVP and general manager of their healthcare division. He led a greenfield project in Chicago to build up CT tube manufacturing. The first new tube product from that effort, the ALTA750 for Toshiba scanners, was launched in 2018. It was shortly thereafter that he took his new position with Chronos.

Although Fitzgerald is no longer part of the team at Richardson, he calls the new tube a technical success and is supportive of the company as it stakes its place in a small, competitive market. “I have heard they are starting to gain momentum now and I am rooting for them,” Fitzgerald says.

When you talk to Pat, it’s clear he’s a people person. Although he enjoys fixing things and solving problems, he prefers building relationships and friendships. But connecting positively with staff didn’t always come naturally. Early in his career, his style was aggressive. “I would sometimes move too fast or run over people who ran at different speeds than I did. I found my style to be effective, but maybe it would bruise people I was working with and that just wasn’t working.” 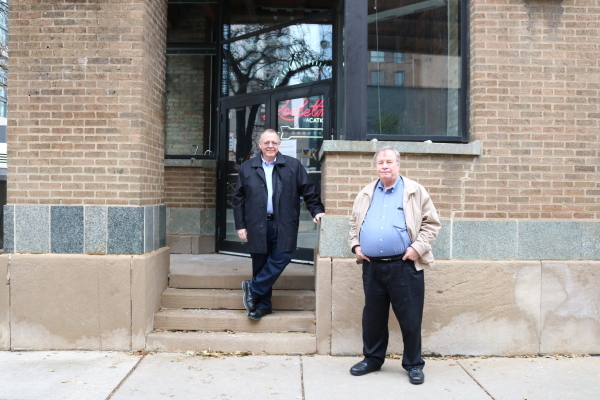 Pat Fitzgerald (L) recreating the previous photo with his father in 2019. Photo taken by his daughter, Alyssa
Siemens, another company he worked with during his career, saw his potential, and invested in management development training to help him learn situational leadership. “Everything in this world is about people and getting them to support you,” he says. “Today, I coach people who were like I was back then.”

In his new role leading Chronos, Pat’s team will be working very closely with the Dunlee team to introduce new products that will have a significant impact on third-party service. He says there is no shortage of opportunities for product development, and a number of prospective partners wanting to work with Chronos.

“Over the years, I have had the great pleasure of spending most of my career working with my friends. These friends and colleagues have, over the years, also become suppliers and customers. I never hesitate to ask for their support because friends don’t let friends buy from strangers. Build strong connections with people and don’t be afraid to lean into those relationships.”